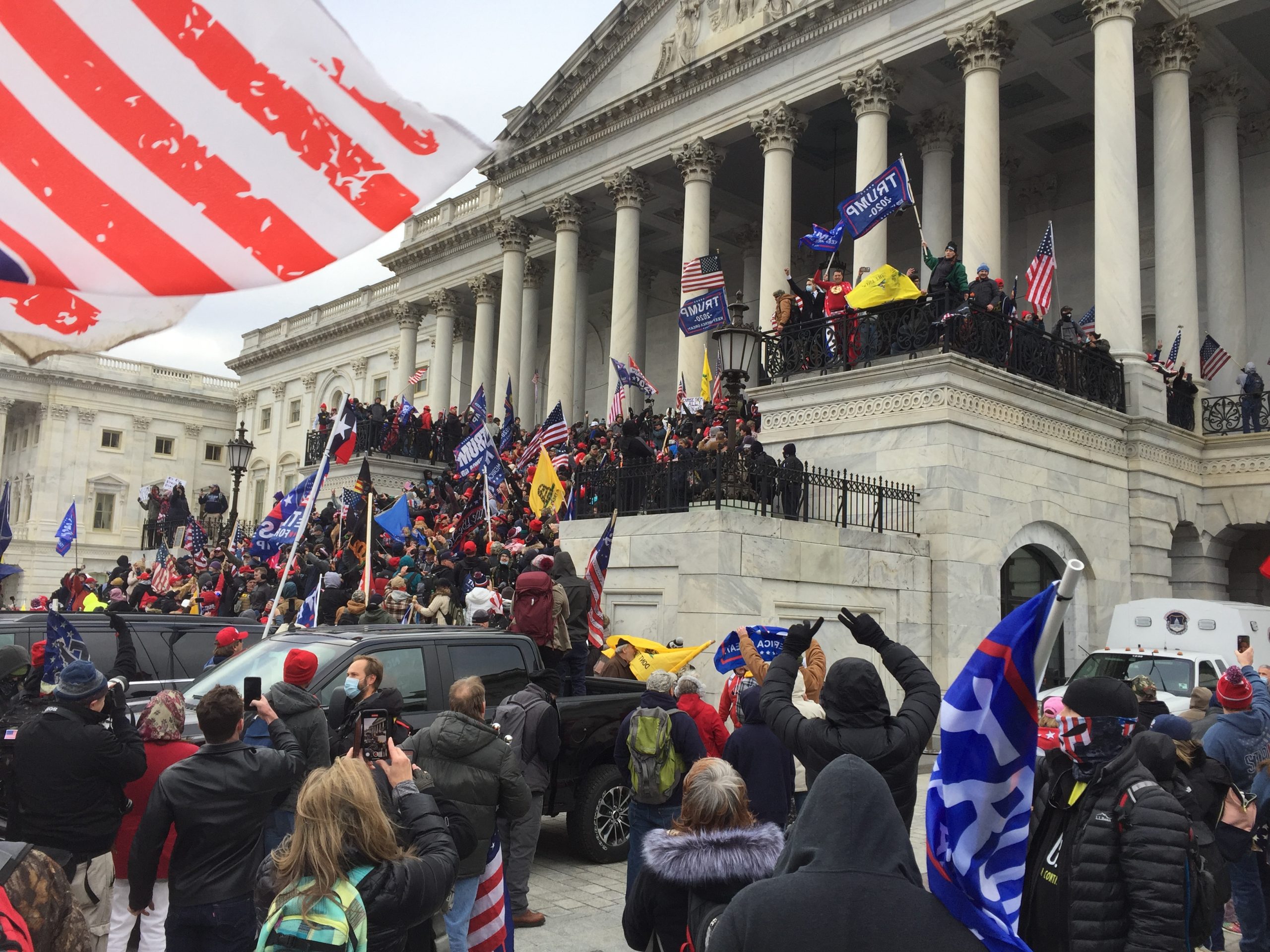 “If we change our eschatology, we will change the world — and take dominion of it for the glory of God. That is the single most important task in all of Christendom second only to spreading the gospel.”[1] So says Andrew Torba and Andrew Isker in Christian Nationalism. Doug Wilson endorses this book, writing, “If you want to know more about Christian Nationalism, this book is for you. You will be getting your info from the horse’s mouth.” It needs to be understood that Torba’s, Isker’s, and Wilson’s definition of Christian Nationalism is different from the broader description as expressed in the previous article on this subject. These men see its adherents as Christians[2] who want to protect their neighbors from “foreign interests, alien worldviews, and hostile invaders,”[3] and have the expansion of Christendom as their goal, through which Christians “order our state governments in such a way as to help Christianity grow and flourish in our states without restrictions.”[4] Their primary objective is “to build a parallel Christian society, economy, and infrastructure which will fill the vacuum of the failed secular state when it falls.”[5] To accomplish this goal, they acknowledged that they must play the “long game,”[6] which could amount to hundreds or even thousands of years. Progress toward this goal is possible only if the eschatology of Christians is transformed from one of pessimism to that of optimism about the future.

These Christian Nationalist leaders believe that America is a nation of Christian people;[7] as a matter of fact, Christians make up a supermajority within the West.[8] Given this premise, the primary reason Christians are not dominating the Western culture at this moment is because of the triumph of premillennialism, especially futuralistic or dispensational eschatology, which they believe originated in the early 1800s and has permeated much of evangelicalism during the last century. Prior to the spread of dispensationalism, with its teachings that the world is deteriorating spiritually and morally and only the return of Christ can remedy this sinful decline, postmillennial eschatology was highly popular. In their view, a return to postmillennialism, and in particular preterism, is necessary if Christians are to take control of the world and establish Christ’s rule over all human systems and institutions.

At this point, it is important to offer some definitions and descriptions to comprehend why Wilson and other Christian Nationalists consider postmillennial eschatology as essential to progress toward Christian world dominance. As most recognize, Christians hold several different eschatological views, and each carries with it unique understandings not only about end times but about how believers are to live presently.

Amillennialism denies a future earthly kingdom, stating that whatever kingdom there is, it is present in the Church today. Charlies Ryrie writes concerning the views of amillennialists:

Conditions in this present age will become increasingly worse until the second coming of Christ at the end of this church age, and the return of the Lord will be immediately followed by a general resurrection and judgment and the commencement of the eternal state.[9]

A slightly different understanding of amillennialism is that “the Bible predicts a continuous parallel growth of good and evil in the world between the first and second coming of Christ (Matthew 13:24-30). The kingdom of God is now present in the world through His Word, His Spirit, His Church”[10] Augustine was the first to articulate this view in his City of God (426 AD); and in time,it became the official position of the Roman Catholic Church and was later adopted by most Reformers.

Some particular teachings of amillennialism include the following ideas:

The rapture and second coming are simultaneous, with Christ returning after the tribulation, which is understood to be taking place presently as described in Revelation 6-18. As for the kingdom, it is both on earth now in the form of the church and in the future when it comes in its fullness at the return of Christ. This view is known as inaugurated eschatology (“already” and “not yet”), best articulated by the theologian George Ladd.

Many historic premillennialists make some distinction between Israel and the church; nevertheless, the church is in essence spiritual Israel.

This form of premillennialism “interprets Revelation 6-18 in a ‘historic’ sense, i.e., Revelation 6-18 should be interpreted as past events in church history rather than future ones—thus the name ‘historic premillennialism’.”[13] Others claim this name is derived from the fact that this was the earliest Christian view of end times,[14] and some, such as Grudem, refer to it as classical premilennialism.

The second coming of Christ will occur before (pre) the millennium and that Christ, not the church (as in post), will be the one to establish the kingdom. Christ will actually reign over the earth as King and during the millennium the Jewish people will experience the fulfillment of the promises made to Abraham and David. According to [futuristic] premillennialism, the present church age will see increasing apostasy which will climax in the time of tribulation before the second coming of Christ. When He returns He will set up His kingdom for 1,000 years after which will occur the resurrection and judgment of the unsaved and the ushering in of eternity. [15]

Theologian Augustus H. Strong defines postmillennialism as follows: “Through the preaching of the gospel in all the world, the kingdom of Christ is steadily to enlarge its boundaries, until Jews and Gentiles alike become possessed of its blessings, and a millennial period is introduced in which Christianity generally prevails throughout the earth.”[16] This view holds that Christ will return after (post) the millennium.

A liberal form of postmillennialism maintains that the world will increasingly become a better place through social action led by the church until Christ’s kingdom is set up on earth, without the need for the presence of Christ.

Those holding to a theological conservative view of postmillennialism believe the second coming is after the millennium, but the millennium is not a literal thousand years. Some believe that the millennium is the entire period between the two advents of Christ, while others think it refers to a golden era that will be brought in by the preaching of the gospel.  This golden era will be followed by the return of Christ. Ultimately, there will be worldwide acceptance of the gospel, which will usher in the millennial kingdom.  Entire countries and civilizations will be spiritually changed. The church has replaced Israel as the recipient of God’s covenantal blessings, and Satan is bound (Rev. 20:1-6), which is why the world will ultimately be transformed for Christ, then Christ will return. Those who have held or hold this view include: Augustus H. Strong (Baptist), Charles Hodge (Presbyterian), Benjamin Warfield & Loraine Boettner (Reformed), Jonathan Edwards (Reformed), and Doug Wilson (Reformed).

Classical postmillennialism, in modern times, had faded from popularity due to disillusionment—following World Wars I and II—with the idea that the world was becoming a better place, brought about either by social action or evangelism. However, it has recently revived through the emergence of new varieties. Three overlapping names describe this revived form, most evident in the Pacific Northwest in a movement called Redoubt led by Doug Wilson and James Wesley Rawles, which embraces a common concern to survive, resist, and reconstruct wider society. Taking the long view, they believe America and the world can be reconstructed one county at a time. The movement builds on the late 20th century writings of R.J. Rushdoony and Gary North. The three overlapping terms are detailed by dispensationalist premillennial scholar Paul Benware:

Postmillennial theologians use an allegorical approach to many prophetic passages, especially Revelation 20. For example, the numbers in Revelation 20 are considered symbols, not statistics. The “thousand years” symbolizes the greatness of Christ’s present kingdom not the duration of the kingdom.

Preterism is an offshoot of postmillennialism and asserts that “most or all eschatological passages describing a tribulation and return of Jesus were fulfilled with first century events surrounding the AD 70 destruction of Jerusalem.”[20] Two views exist: full or consistent preterism teaches that Christ came in the form of the Roman army in AD 70, and we are currently in the new heaven and new earth. A second form is partial or moderate preterism, which proclaims that much of end times prophecy has been fulfilled, but Christ will yet return,[21] at which time some resurrections and final judgments will also take place.

Representatives include R. C. Sproul, Hank Hanegraaff, and some in the Redoubt Movement.

The goal of these essays is not to support a particular eschatological view (the writer is a dispensational premillennialist) but to explain better why Christian Nationalists believe a postmillennial/preterist understanding of the end times is necessary to change the world and prepare for Christ’s return, as well as what efforts they are making to bring about this change. With these basic eschatological definitions and descriptions in hand, we can better describe Christian Nationalism and the Redoubt Movement in our next article.

Volume 28, Issue 4, May 2022 Since publishing the first three parts in “The God Debate” series, I have read Matthew Barrett’s Simply Trinity and

Volume 28, Issue 3, April 2022 Recently we published a book review of Beth Allison Barr’s book, The Making of Biblical Womanhood.  Since then a

PrevPreviousChristian Nationalism and the Great Hibernation